Inter School Story Telling Competition ‘Once Upon A Time’ 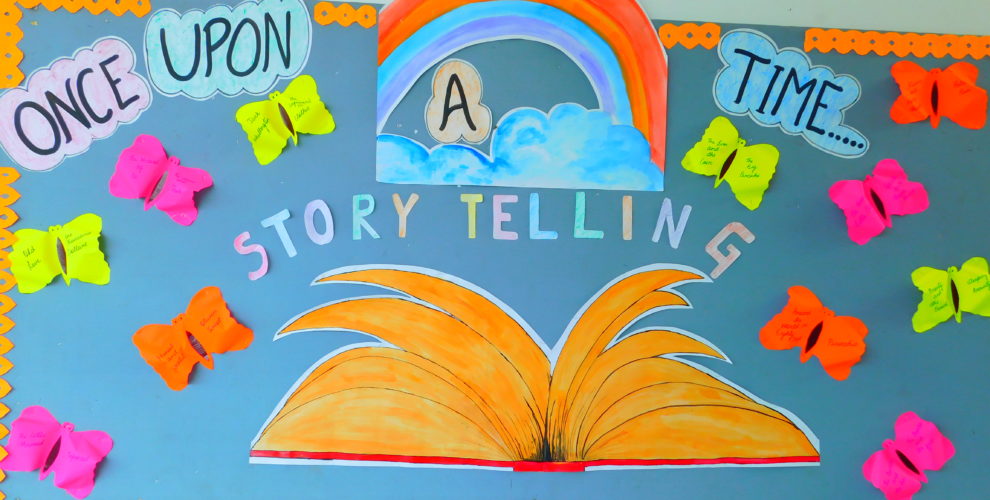 Story Telling is an art of narrating or unfolding the narratives of a story. Story Telling has a been a part of our culture and tradition from decades or we can say from many civilisations. To acknowledge and showcase our love for stories Vidyatree Modern World College organized an Inter School Story telling competition ‘Once Upon A Time’ in its premises on 9th September, 2017, in which students from twelve schools participated.

Inter School Story Telling Competition ‘Once Upon A Time’ comprised of three categories, which were ‘pre-prepared story’, ‘picture story composition’ and ‘weaving a story with the words given’. Each category had one student participant from each school.

For the first event, students narrated a pre-prepared story using props.The creative and artistic use made judges wonder as this competition was only for Grade IV and V.  For the second and the third event students were given half an hour to write the stories and then 15 minutes for preparation. Then they presented it in front of the judges. Through this the judges judged their thinking abilities, creative writing, use of vocabulary etc. The participating schools were: Vidyatree Modern World College, Kunwars Global School, La Martiniere Girls College, G.D Goenka School, Delhi Public School Jankipuram, Jaipuria School, Kunskapsskolan School, Modern Academy, Lucknow Public School Sahara States, Spring Dale School, Pioneer Montessori Inter College and New way Senior Secondary School.

The chief guests for judging the event were Mr. Raja Bose(resident editor,Times of India), Mrs.Tanya Sahani (Co-owner  and director of Health Zone) and Mrs. Devanshi  Seth Sood (former editor Lucknow times). They judged the performance of the students on the basis of the given criteria.

The chief guests shared their childhood stories while giving away the prizes and appreciated everyone for their efforts. All the students were given participation certificates. The overall story- telling competition was won by Vidyatree Modern Word College and the runners up were New Way Senior Secondary school. The program was concluded by Mr. Siddharth Kapoor who presented the vote of thanks.