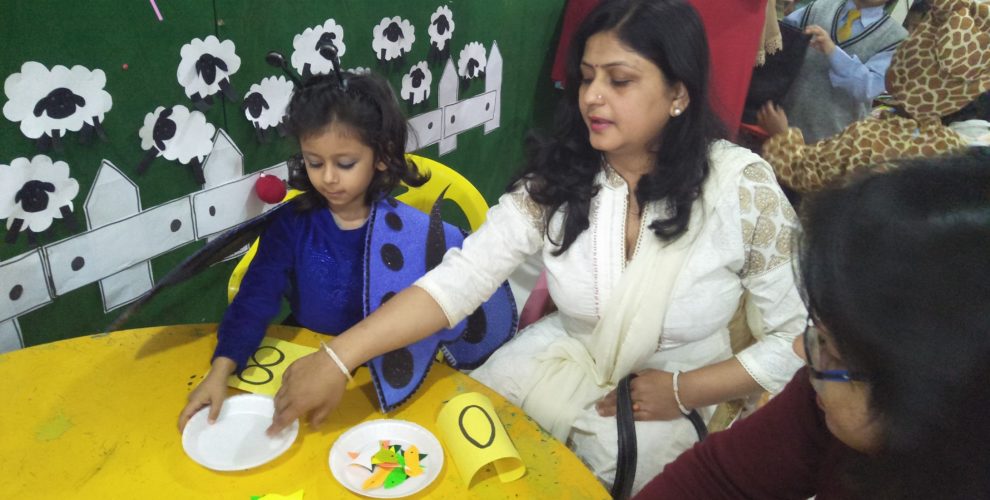 Students Led Conference of session 2017-18 was organised on February 17, 2018 wherein the students project their journey of learning throughout their grade.

Parents and learners of Grade Nursery enjoyed the riddle activity very much. Parents were given riddles based on different animals and students had to tell the animal.They solved the riddle with full enthusiasm and quick thinking. Parents also recited the riddles with sound of animals. This session was enjoyed by all.

Students of KG Red presented a role play based on water cycle. During this they explained different stages : evaporation, condensation and precipitation. Students exhibited their understanding presented on a particular stage of the water.

‘I am the fan of numbers’ was one captivating activity of grade KG Blue which did not let children to move from their places. There was a hand fan kept which had tasks on various mathematical concepts like before, after and between numbers, number names and shapes. They had to do the task which would come on spinning the fan.

Kids of grade PREP Red were full of enthusiasm to demonstrate their learning to their parents.Activities
like ‘Segregating naming words’ in which they had to identify and segregate flash cards of person, place, animal and things and put it at right place gave them chance to showcase their understanding of nouns.

Kids of Grade Prep Blue were so excited to show their parents what they learnt. Activity on Vakya Rachna gave them a chance to show their understanding of two ,three, four letter words and then framing a complete Vakya with great zeal and interest.Their understanding and their communication skills gave parents great happiness on seeing efficient learning of their kids.