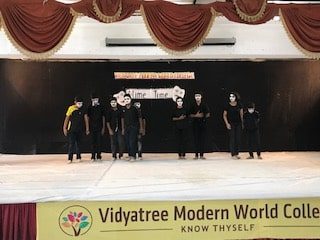 Mime is the use of movements of your hands and body and the expression on your face to tell a story or to act something without speaking.

Today i.e. on 28.08.2018 a Mime competition was organized in our school VMWC for students of class 6th to 12th. Every student showed their interests in this event and prepared for it very enthusiastically. Moreover, they painted their hands and faces with white color and wore same costumes to give it an effect of real Mime act. All the teams from all the houses followed the rules and regulations for the Mime act very carefully. As mentioned, their were no props used at all and no body spoke a single word which made it really interesting. Each and every participant expressed himself/herself only through their expressions and acting. The audience was very supportive and kept on cheering their teams to boost their confidence. The four houses–Krishnamurthi, Socrates and Vivekananda , had two teams each, one from the 6th-8th section and one from 9th-12th. There was a healthy competition between all the teams and everyone thoroughly enjoyed it. The results announced later were all follows–
JUNIOR SECTION
Winner- Vivekananda
Runner-up – Gita
SENIOR SECTION
Winner- Krishnamurthi
Runner-up – Gita

Students of Grade I interacted with Guest Speaker for their unit.

Introduction to ‘Articles’ was never so fun