Equipping our children for challenges of tomorrow 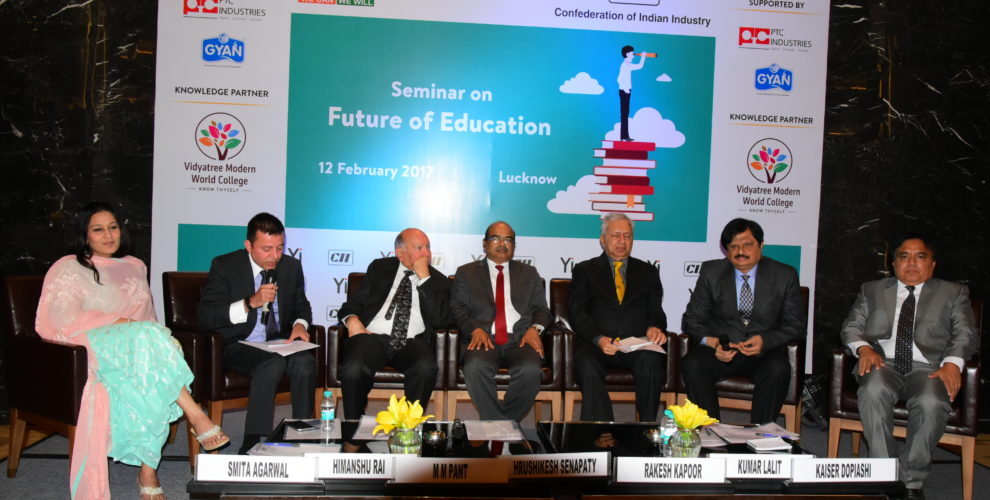 “Children starting school this year will enter careers that do not yet exist, using technology that hasn’t been invented yet”

Over the years, technological changes have been so drastic that it wouldn’t be correct and relevant to teach our children with a specific set of tools as they may be obsolete very soon.

So how is it going to be for our children? What will education be like?

At VMWC, we are constantly working towards making our children future-ready. We teach our children to be independent learners and problem solvers. In this regard, we thought of initiating a dialogue on the ‘Future of Education’. A seminar on the same, in collaboration with CII and YI,  was just a way of starting a dialogue among all stake-holders __ teachers, parents and schools __ so that we can plan ahead and work towards it.

Held at Hotel Renaissance on February 12, seminar saw some eminent educationists get together to discuss the future of education. It was an enriching 2-hour event where the gathering, comprising representation from pre-schools, primary schools, parents and many dignitaries of the city, pondered over the education scenario in the years to come.

A short video put together by Mr Siddhartha Kapoor, Director, IB, VMWC, introduced the theme. In a few minutes, it showed us how drastically technology has changed over the years and how the apps we cannot do without have been all developed in the past decade or so.

All the speakers spoke briefly about the main components of education: Content, Pedagogy and Assessment and what each of them would come to mean in the years to come.

Sprinkled with anecdotes from his work at IIMs, Prof Rai’s words kept the audience interested throughout. He summed it up with how technology can only be an enabler. It cannot replace people.

Next up was Mr Kiasar Dopaishi. A teacher himself, Mr Dopaishi is the president of South Asian IB Schools Association and principal of Singapore International School in Mumbai.

Mr Dopiashi pointed out how in most schools the curriculum that’s taught is of the 19th century, teachers are of the 20th century but we are preparing our children for the 21st century! In that sense, we are trapped!

That’s why, as he rightly said, teaching has become more skill-based. Taking his own example, he told us how when he was teaching at a ‘traditional’ school, he wouldn’t go near a computer. But once he moved to an international school down south, he wasn’t left with a choice but to learn about it. And his students taught him.

He signed off with the thought that in the fast-changing world, our children will have to be trained to be able to Learn, Unlearn and Relearn.

Kumar Lalit, GM (HR, IR, Admin) , Tata Motors, was the next speaker. He brought with him a professional’s view of the future of education. He summed up with how the future would be of auto didacts, people who are self-learners.

Mr Rakesh Kapoor, VMWC founder, spoke next. He pointed out how we need to raise a child’s capacity to learn. And for that to happen, teachers will have to be trained in ‘mindfulness’. Mindfulness is freedom from conditioned responses in real life situations.He said: “If we don’t know self, reality controls us; if we know self, we control reality. Because then our mind is awake.” Mr Kapoor has also penned a book on the topic. Called Power of Knowing Thyself In Zero Time, it couldn’t have come at a better time. Mindfulness has been introduced in many B Ed courses and is being promoted by IB as well. The book was later released at the event.

Prof M M Pant, former Pro V-C of IGNOU, IIT-Kanpur and visiting faculty to the Univ of W Ontario, Canada, spoke about how assessments at school are “the stupidest”. He pointed out how it is important to ask questions. At the same time, one should know what question to ask.

That’s way the most important abilities have changed from memorising and understanding to applying knowledge, problem solving, researching, thinking, collaborating, etc. In that sense, he said, auto didacts would not be an exception but the rule. Children will have to learn to be self-learners.
As far as technology is concerned, all information is out there, as it were. But children will have to learn what to make of it. And how much of it is relevant for them.

Dr Senapaty very pertinently pointed out that education is not a commodity that can be transferred from the teacher to the student. From the passive learners of yesteryears, we have moved to having active learners in classes. The focus has shifted from giving the correct answer to the process of learning.  He said assessment has to be integrated with pedagogy.

Once all the speakers had aired their views, there was a panel discussion on the same moderated by Prof Himanshu Rai. Later, audience also got to ask questions. Prof Rai asked Mr Kaiser what he meant with being an ‘lifelong student’ at which he explained that being a student isn’t about taking exams and collecting degrees, it’s about learning which is a lifelong process.

The panelists were one voice in that the best thing a parent can do is allow his child to have an open mind and never be afraid of asking questions.

Another parent asked if there were ways of helping children over and above their text books. To which he was told how there are a lot of ebooks and also websites which offer free video lectures.

Prof Rai summed up the discussion with the following salient points: Learning is not a spectator sport, it’s a participative sport in which both the teacher and the student participates. It is also a lifelong process. For one to be able to the fast-changing world, one should be willing and capable to learn, unlearn and relearn. With information overload, children need to learn to glean the information they need and also reject what they don’t require.

This is just a start. We, at VMWC, are glad we engaged a roomful of people in taking the time out to think about the future of education. Because our children are our future and what’s in store for them is something definitely worth thinking about.

Those who experiment will be lifelong learners says Heena Srivastava, home room teacher