Gaining victory over what’s to come 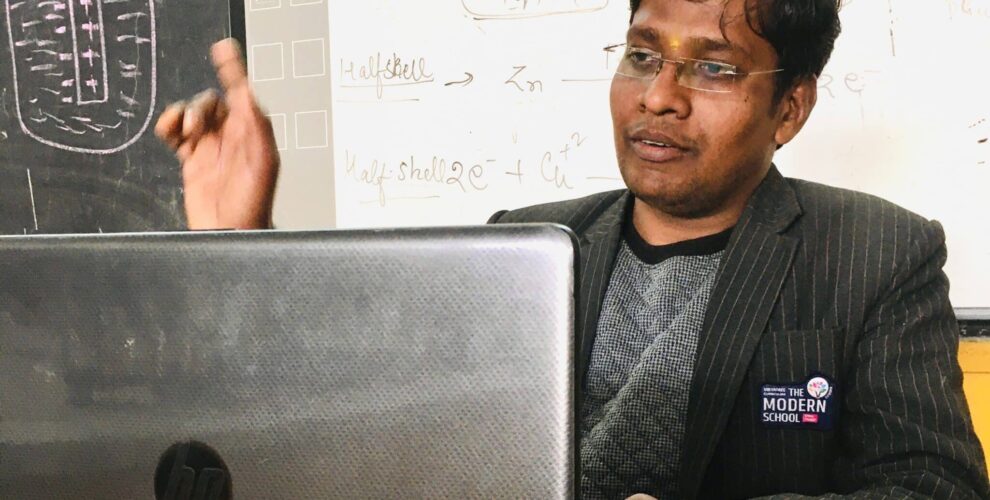 My experience as a teacher at Modern School, Lucknow

As a teacher it was tough for me to cope during the initial days of the COVID-19 pandemic. I wondered how our routines of teaching and learning would continue without the school building and the classrooms that we had all become used to over the years. It didn’t seem to be a possibility at all for me! For me teaching meant reaching the hearts and minds of the students, and I had done it for many years, but only in a classroom, much like all the other teachers I knew.

However, within the Modern School community, the management did their best to make sure life could continue as it used to, even with the changes that had to be introduced due to the pandemic. Firstly, the founder sir, Mr Rakesh Kapoor, arranged proper online yoga, pranayama and mindful-meditation sessions every morning so that we could take care of our physical and mental wellbeing. The school management was very supportive and motivating, and it helped me to know that they wanted the best for the teachers as well. They always made me felt cared for. Even something as small as providing Kadha (kahwa) to all teachers three times every day to boost their immunity, when we started working from school, made me feel that I am working at one of the best institutions that keeps everyone’s physical and spiritual wellbeing in their minds!

As soon as online classes started taking places, I would only use my mobile phone, since I didn’t already have a laptop of my own. However, with help from my senior coordinator Dr. Saroj Rai, I purchased a laptop – that too at a time when everything was shut! — and finally started using it for my online classes as well. Moreover, many of my students helped me with my technical knowledge as well, and I feel grateful for students Malay, Paras, Harshit, and everybody else who helped out. Not knowing one’s way around the tools that one is supposed to use in their daily work had caused me to feel quite stressed, and the guidance from my community helped me feel at ease during a very anxious time. Plus the Lernio app used by the school to connect with parents and manage online school, is very effective and user friendly.

It was also a tough time in the economic sense, since a lot of schools were either letting teachers’ employment terminated, and paying no salaries for six months, and or severely deducting their salaries -between 40% to 75%. But I feel extremely proud to mention that not only did Modern School pay us our salaries on time, they also continued to pay us our complete salaries till the month of October, that is for 6 months of the lockdown and the pandemic, so that no one suffered due to the pandemic. (At present the deduction is zero percent to 20% only.) The school supported us when we needed the most. I’m confident in saying that no other school in Lucknow has done the same for their teachers. Knowing that the school’s management team was willing to extend themselves to take care of our financial and, by addition, emotional security during a time of intense distress worldwide really made me feel very grateful and motivated me to give my best to my job.

With this said, once we started coming to school and taking online classes from the school, the management took a lot of initiatives to make sure that all the teachers would feel secure while spending time at the school. Before each day started, we participated in social-distanced Yoga so that our minds and bodies could deal with the day as it came, unburdened by stress or anxiety. It helped us all rejuvenate our intrinsic motivation so that we could perform as well as we would like!

During this time, online PTCMs (parent teacher child meetings) were also held, and it was really a wonderful experience for me because all the students joined during their given slots with their parents! Often, when we would have PTCMs in the school, all of the children wouldn’t show up and both parents would not show up, but this was not the case for online PTCMs – and it really was a surprise. During online PTCMs all children and during the initial lockdown months, both parents attended. Moreover, when any student or parent became shy, I could say that it was an “aha moment” for me, because I knew what was going on, and I was glad that I could facilitate that through my classes. It could be either positive or negative, but what mattered was that things were happening, during a situation when everything was all over the places, and that learning continued as per usual.

The school also extended a lot of support to parents as well, so that they don’t feel the financial burden of continuing their children’s education during a time when schools were operating primarily through online means. The late fee fine was removed for the session, and the school decreased back to the previous session’s fee structure. The school even extended special help and discounted payment plans to a few parents who genuinely were unable to pay the school fee on time. The parents who paid on time, I thanked them, and to the parents who could not, the moral support of the school went a long way. One time a parent got very emotional, and were extremely grateful to the school, saying that he wants to “put a coin in the River Ganga” to express their gratitude for this fact.

As the lockdown ended and life started to resemble a shadow of what it used to be before, I realized that Modern School’s motto – “Know Thyself” – is something that I experienced first hand. And I’m sure that all the students of the school, as well as their parents, would have experienced it closely as well.

Finally, I’d like to express my gratitude to our respected Founder Sir, Mr. Rakesh Kapoor, who always puts in a great effort to motivate us via the school philosophy, inspired by the great philosopher J. Krishnamurti, and inculcate the principle of “Heyam Dukahm Anagatm” meaning, “Aane waale dukh par vijay prapt karo” – gain victory over the sadness still to come.

So, even though there were a lot of challenges, through mindfulness and the motivation and courage shared by the Modern School management, I found myself flourishing even during a tough time! As the tides of time keep changing, and through the many ups and downs, it’s been a wonderful journey. And with a renewed spirit, I even find myself more motivated.

Best wishes and profound thanks to Modern School and its progressive management!

Career of the week – LAW